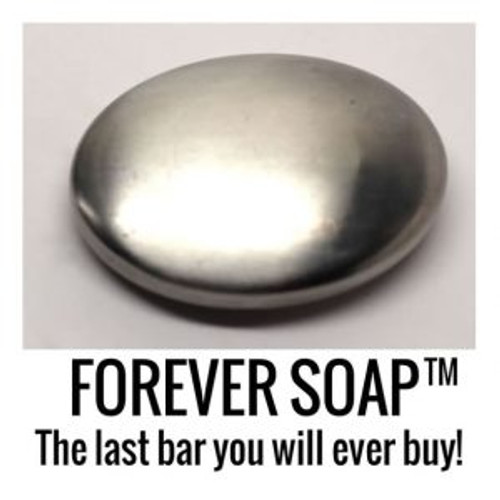 I have loved to cook since I was a small child. My first cookbook, "The Snoopy Cookbook" turned me on to the world of culinary delights. I spent my youth planted in front of the TV on Saturday nights, ready and waiting for my beloved cooking mentor Julia Child. Julia taught me much of what I know in the kitchen, and to this day, I am a serious cook. At one point, I discovered the secret of how chefs kept their hands from smelling like garlic and onions. After finding that secret, I knew it could be used on other parts of the body as well. Why not remove smells from other parts of the body the same way chefs remove strong odors from their hands? It is natural, non-toxic, and most importantly, it works to remove odors 100%! I put my idea to the test, and it worked!

How it works: FOREVER SOAP™ is rubbed on areas that need odor removal, while in the shower. The water reacts with the FOREVER SOAP™ and literally transfers the odors from the body to the bar, and then the odors wash down the drain.

FOREVER SOAP™ can be used anywhere on the body, to remove odors. It is an entirely new way of cleansing the body. I have always said, "CLEAN HAS NO SMELL!"If you want to perfume your body, you must remove any odors first, so you can start with a clean slate. Otherwise you will be perfuming body odor, so remove the odor first, then apply your preferred scent.

Why you need FOREVER SOAP: It is non-toxic and removes odors from the body without any perfumes or deodorants. The best part is that it lasts FOREVER and doesn't leave slime in your shower like a bar of regular soap!